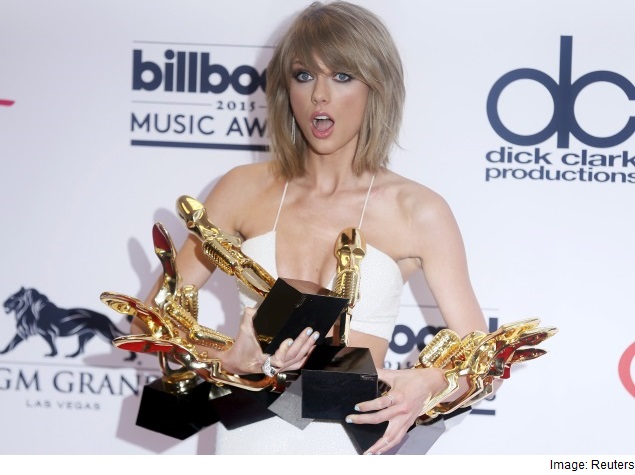 When Taylor Swift speaks, even the most powerful company in the world listens.Less than 24 hours after Swift complained publicly that Apple was not planning to pay royalties during a three-month trial period of its new streaming music service, the company changed course, and confirmed that it will pay its full royalty rates for music during the free trial.

“When I woke up this morning and read Taylor’s note, it really solidified that we need to make a change,” Eddy Cue, Apple’s senior vice president of Internet software and services, said in an interview late Sunday.

In a letter posted Sunday morning to her Tumblr page, called “To Apple, Love Taylor,” Swift addressed a situation that had begun to send shock waves through the music industry: Apple, which has announced a subscription streaming service to compete with Spotify, Rhapsody and Deezer, was not going to pay royalties during the trial period.

Swift, who last year pulled her music from Spotify in another dispute over royalties, called Apple’s policy “shocking, disappointing and completely unlike this historically progressive company.”

“We don’t ask you for free iPhones,” she added. “Please don’t ask us to provide you with our music for no compensation.”

Swift had framed her letter as an explanation for why she was withholding her latest album, “1989,” from Apple’s new service. But she said that she was also speaking for other musicians who were afraid to speak up about the issue, and her comments found wide support in the music world. On Twitter, Elvis Costello called Swift’s note “a note from our future President.”

Apple’s new service, called Apple Music, is set to become available worldwide on June 30. Besides its longstanding iTunes download store, it will include a $10 (roughly Rs. 630) streaming subscription plan, a free Internet radio station and a media platform that will let artists upload songs, videos and other content for fans. Unlike Spotify, which lets customers listen free or pay monthly fees to eliminate ads, Apple’s subscription feature will have no permanent free level.

(Also see:  Apple Music Will Be Available at Rs. 120 per Month in India and Everything Else You Need to Know)

Apple’s arrival in streaming music has been much anticipated by the music industry, but its plan not to pay royalties during its trial period drew complaints from independent music groups around the world, saying that the company’s terms were unfair.

But the criticism from Swift – perhaps the biggest star in pop today – was a damaging public-relations misstep for Apple on the eve of its big new product release.

Cue, the Apple executive in charge of iTunes and Apple’s new music service, said that he had spoken to Swift on Sunday. “I did let her know that we heard her concerns and made the change,” he said.

Cue said the company’s original plan was to pay a slightly higher royalty rate – at least 71.5 percent of the money it collects from sales, as opposed to the industry standard of about 70 percent – in exchange for the free trial.

But many record executives, particularly at small labels where margins are thin, describe a frightening scenario in which income from important new albums that come out during the free period would not only lose out on crucial download income but also get nothing from Apple’s new streaming feature.

Cue said that Apple will now pay royalties to both record companies and music publishers for the use of music during the trial period. He declined to specify how much money that might cost the company, which is the biggest retailer of music.

Swift has long been outspoken on economic issues for musicians. In a piece in The Wall Street Journal last year, she wrote: “Valuable things should be paid for. It’s my opinion that music should not be free.”