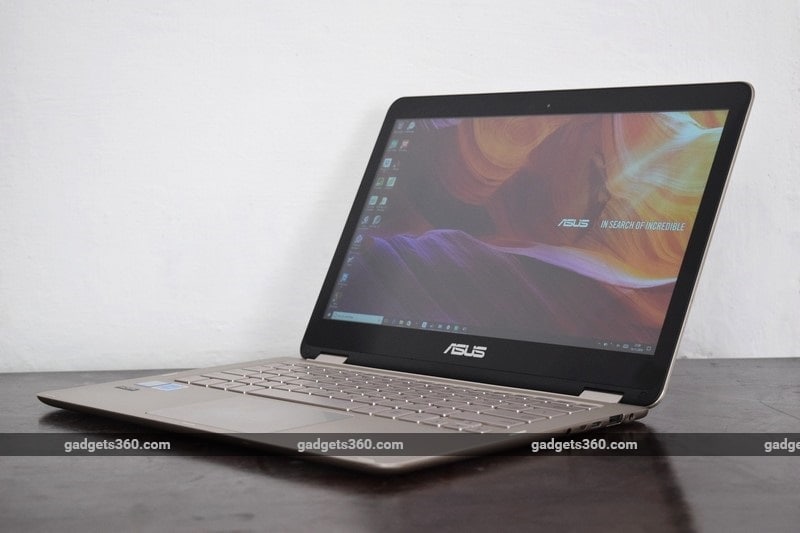 Asus has been pumping out new laptop models at a prolific pace, and is slowly but steadily climbing up into the top tier of manufacturers. It has one of the most diverse portfolios in India, ranging from budget-friendly basic models to super-slim ultrabooks and even massive gaming machines. The company’s Zen branding is reserved for its most stylish, sleek and powerful offerings.

Last year, we took a look at the UX305, which was undoubtedly designed to take on the MacBook Air, and in our opinion, succeeded. Later, we evaluated the UX303, which was nearly the same but had a lot more power at the cost of a little extra body weight. Now, we have with us a third sibling, the ZenBook Flip UX360, which is quite different. As its name makes rather obvious, this is a 2-in-1 with a touchscreen and a lid that can flip around.

Asus ZenBook Flip UX360CA look and feel
The UX360CA isn’t anywhere near as slick as its siblings. It’s clearly two separate halves resting against each other; not the seamless clamshell that the other models are. It’s also bulkier and more rounded at the sides and corners. The top and bottom are flat, since they have to rest against each other when the two halves are flipped around.

The device can be used as a laptop or as a tablet with the lid flipped around, but Asus doesn’t specifically promote other “in-between” usage models such what Lenovo calls “tent” and “stand” modes. There’s a large Asus logo below the screen which looks funny upside down, so clearly Asus didn’t have this kind of usage in mind even though it could work for some people. You’ll find a USB 3.0 port, SD card slot, status LEDs, and the power and volume buttons on the left side, while the DC power inlet, another USB 3.0 port, a Type-C (5Gbps) port, Micro-HDMI output, and 3.5mm combo socket are on the right. Asus includes a USB Ethernet dongle and another Micro-HDMI to full-size HDMI adapter in the box, which are both much appreciated.

While all buttons and ports are accessible when you flip the base around, the speakers which are on the bottom get sandwiched between the two halves. Grip is also a bit difficult in tablet mode since there are sharp edges where the inner surface of the keyboard deck meets the sides of the body, and this becomes the outer edge when flipped around.

Our review unit was a champagne gold colour and looked quite attractive. There’s the trademark Zen-series concentric circle pattern on the metal lid, which always looks sophisticated. The colour carries over to the keyboard keys and trackpad, though a few crooked stickers spoil the look somewhat. The keyboard isn’t backlit, but it is automatically deactivated when you flip the hinge past a certain point. Windows 10 automatically rotates the display and switches to its touch-friendly Tablet Mode unless you disable it.

Switching between laptop and tablet usage is totally seamless, though the bulk of the ZenBook Flip makes tablet mode comfortable only if you’re sitting in such a way that you can rest it on your lap or knees. Overall thickness is 13.9mm and weight is 1.3kg which is great for a laptop, but not for a tablet.

Asus ZenBook Flip UX360CA specifications and software
Asus sells the ZenBook Flip in India with an Intel Core m3-6Y30 processor, which is one of Intel’s low-power Core M models in the sixth-generation family and doesn’t require a cooling fan. There’s 4GB of RAM and either a 128GB or a 512GB SSD – our review unit had the latter. The same model abroad comes with a variety of options for all its core hardware, and just like with the UX305, we would have liked 8GB of RAM to at least be an option here.

The screen has a resolution of 1920×1080 – Asus’s initial promotional materials specified the option for a 3200×1800-pixel screen which is available in some markets outside India, but we don’t see that version on sale here. Intel’s HD Graphics 515 capabilities are integrated into the processor, which should be enough for most everyday tasks. There’s also Wi-Fi 802.11ac and Bluetooth 4.1, plus a 720p webcam. Battery capacity isn’t specified, but diagnostics tell us it’s a 54Wh unit. 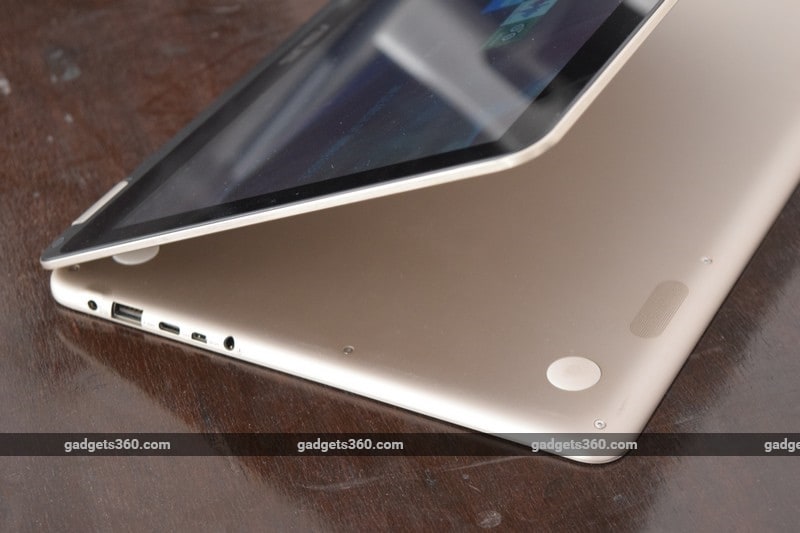 You get Windows 10 Home and a bunch of Asus apps including Asus WebStorage, the spammy Asus Giftbox, and several small utilities to control things like screen auto rotation, high power delivery through the USB ports, screen colour temperature, and manage audio profiles. One new addition is Asus HiPost, which intercepts anything you copy to the Windows clipboard and syncs it to an Android phone running the same app.

Asus ZenBook Flip UX360CA performance
The ZenBook Flip is quick to boot and things generally seem to run smoothly. Programs launch without any fuss, and we never had trouble when popping between browser tabs with heavy pages loaded, even when streaming video. Speaking of that, we had no trouble playing HD and even 4K content, thanks to the CPU’s dedicated video acceleration hardware.

The screen is bright and crisp, though colours are a little oversaturated. We had to pump up the brightness more than usual to compensate for distracting reflections and smudges on its glossy surface. Windows scaling was set quite aggressively by default to make everything appear larger and more touch-friendly, but we were happier and felt more productive with it turned off.

The speakers turned out to be capable of pushing out considerable volume. Voices in videos came out clean and distinct, with minimal distortion. Music was tinny and scratchy, and suffered more when the lid was flipped around because of the speakers’ positioning. We were concerned about heat, since the UX360CA relies on passive cooling. On some occasions, the bottom of the unit did get warm, but not enough to make it uncomfortable on a lap. We tried using this device in various situations and positions, and concluded that it works better as a laptop than as a tablet.

Benchmark scores showed reasonably good performance. We recorded 2,756, 2,476, and 3,003 points in PCMark 8’s Home, Work, and Creative runs respectively. Cinebench’s score was 210 points, and POVRay ran its internal benchmark in 9 minutes, 27 seconds. 3DMark’s Fire Strike test returned 526 points which means that 3D gaming is clearly not one of this laptop’s strong points, though older titles might run at low settings. We got an average of 18fps from Tomb Raider (2013) at the native 1920×1080 resolution using the Normal preset and would have to reduce settings further to make it playable.

We measured battery life with Battery Eater Pro and got an impressive 4 hours, 36 minutes before the UX360CA shut itself down. It ran for much longer with general use, including a lot of typing, Web surfing and video playback, but we’d still want to keep the charger handy if we needed to get through a full workday. 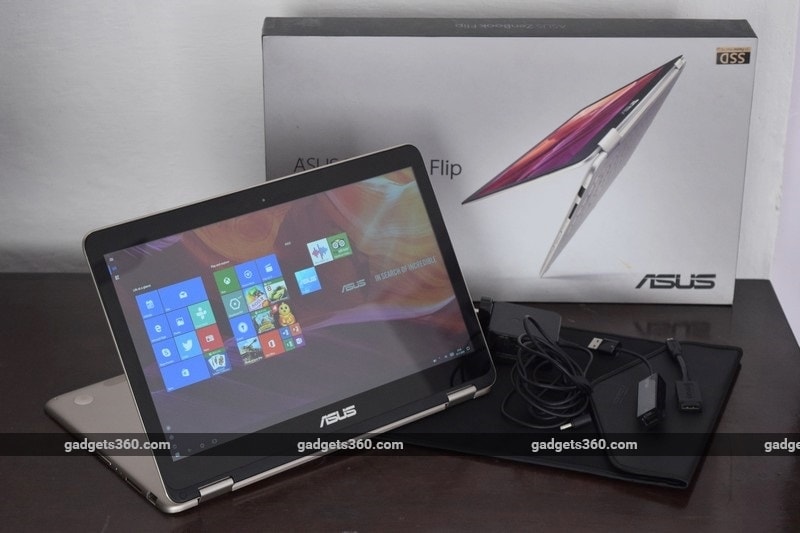 Verdict
Asus has tried something new with the ZenBook Flip, and is keeping up with the likes of Lenovo. It’s a good laptop, but only if you really value the touchscreen and tablet-style functionality. The price is reasonable considering there’s a 512GB SSD – the 128GB model is priced much lower, but you can still get better performance and a more elegant body if you choose an ordinary laptop.

For those not specifically looking for a 2-in-1, the UX305 and UX303 remain better options. We loved the former when it first launched, and it has now been updated with sixth-generation CPU options which we believe would equalise performance with the UX360CA.