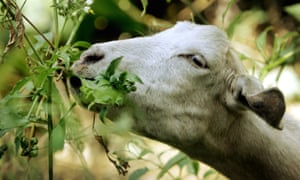 A California town threatened by the sort of wildfires that recently wiped out a neighbouring community is appealing for an unusual type of help: a crack team of goats.

Nevada City has launched a crowdfunding drive, dubbed “goat fund me”, to recruit a herd to munch through acres of wildfire-prone vegetation at the fringe of town.

In an effort to cut down a 450-acre greenbelt, town officials are appealing for $30,000 to acquire the goats. According to the goat fund me page, it can cost up to $1,000 an acre for such specialist grazing, as about 200 goats are able to finish off an acre a day.

The city council expects the goats to act as the first wave in an assault on the vegetation, with humans following in their hoofsteps to clear away larger foliage such as tree limbs

“That’s a lot of acreage but we’re breaking it down into bite sizes and prioritizing where the risk is greatest,” wrote Reinette Senum, Nevada City’s vice-mayor, on the page.

“There is little need to stress how important it is to the safety and wellbeing of Nevada City citizens and neighboring residents that we reduce the fire load in our surrounding forests and neighborhoods.”

Nevada City’s concerns over wildfire have been heightened following a year of enormous blazes in California. The town in the foothills of the Sierra Nevada mountains is just 70 miles south of Paradise, which was virtually wiped off the map last year in the deadliest fire in state history.

There is a sense of urgency over the deployment of the goat squadron, with winter providing the best window of time to pare back vegetation that may spread wildfires once summer arrives. While providing a cheaper grazing option than machinery, goats still require the oversight of a herdsman to ensure they don’t go rogue.

A month after launching the funding drive, Nevada City is closing in on its goal, with nearly $17,000 raised so far.

“I lost my house in Santa Rosa in 2017,” read a comment from Dale Albin. “I recently donated to the Paradise fire victims. I like the idea of funding goats rather than victims. Go goats!”