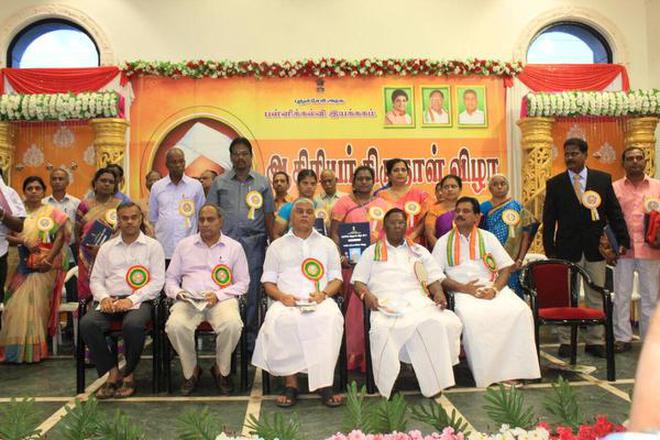 Chief Minister V. Narayanasamy on Tuesday made out a strong case to bring “education” under the State list to enable states to form their own curriculum according to local requirements.

Speaking after presenting awards to best teachers in the Union Territory on the occasion of Teachers’ Day, he said that education was now included under the concurrent list. Once it falls under the purview of the State Government, the educational curriculum and syllabus would be framed in tune with the local requirements.

Mr. Narayanasamy said that since NEET was based on CBSE pattern, students who had studied under the State syllabus (Tamil Nadu pattern) were not able to compete with those who studied in CBSE. The Central Government must modify its stand so that states would be able to form their own curriculum.

Deploring the Centre for virtually intruding into the rights of the States, he said that the Puducherry Government would soon write a letter to the Centre to make education a State subject.

A recent survey by the Ministry of Human Resources Development (MHRD) had ranked Puducherry in the sixth place in the country in higher education. Puducherry should emerge as the topper in school education also.

Stressing the need for teachers’ cooperation in realising the dream of quality education, the Chief Minister announced cash awards of ₹1 lakh, ₹75,000 and ₹50,000 for top three Government schools.

Education Minister R. Kamalakannan called upon the teaching fraternity to find out whether children were able to apply the knowledge they acquired through education.

“Presently, a student in class V found it difficult to read the contents of a book of class III. This only shows a large gap, which needs to be bridged. The ancient pattern of Gurukul system of education would not be feasible now. But the teachers in government schools should find out and make assessments before the end of the academic year to ensure that the performance of the students improved.”