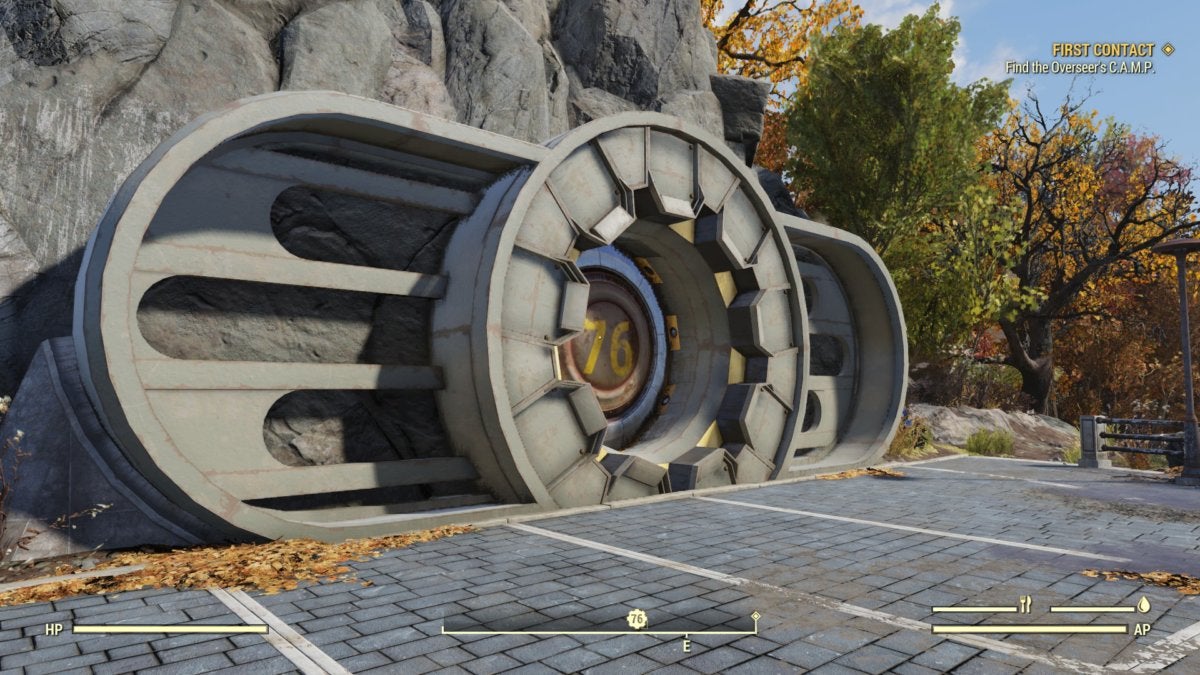 It’s a familiar ritual, creating my latest Fallout character. Under the harsh glare of Vault 76’s fluorescent lights I poke and prod, sculpting the face of a man who I imagine entered this glorified bunker as a young man and emerges into the bombed out remnants of West Virginia much older, covered in wrinkles, hair gone white, eyes still kind. For a moment I feel the familiar swell, the “Oh wow I’m about to play a Fallout game” sensation of limitless potential.

And then a microphone cuts in. “Yeah, no, I’m still in character creation. What’s it do?” Who the hell is that?

Another voice says “Hello?” and after a few seconds repeats that same cautious greeting.

“Wait, can you hear me?” says the first guy. Welcome to Fallout 76, where your fellow survivors are so annoying you’ll almost wish for nuclear winter.

Not quite heaven, West Virginia

Fallout 76 ($60 preorder on Amazon) kicked off its PC beta this week and so far I’ve played maybe three or four hours—a small chunk of a very large game. By no means are these my definitive feelings on it, and I expect to put another 60 or 70 hours in post-release, just judging by my time with Fallout 4.

Will those 60 hours feel rewarding? I’m not sure.

At times, Fallout 76 is the game I want. It’s rare, but I have had moments where I’m entranced by its post-nuclear West Virginia, so lush and green compared to the bombed out Capitol Wasteland or even Fallout 4’s Boston. It’s a beautiful world, and a dense one. Every few steps there’s another ruin to explore, another quest to pick up, another holotape to listen to.

You emerge from Vault 76 a mere 25 years after nuclear war destroyed America, and civilization as we know it. “Reclamation Day.” Your job is to rebuild, to scavenge for supplies and lay down a foundation for a new society.

That’s the large strokes, at least. On a more concrete level, your initial goal is to track down Vault 76’s Overseer. She left earlier than the rest, with instructions from Vault-Tec to secure three nuclear missile silos somewhere in rural West Virginia. It’s supposed to be her job, and her job alone—but you break into her computer and find a recording asking for your help.

You and everyone else, I might say. See, here’s the thing: Fallout 76 is not a multiplayer game. Not really. It’s a singleplayer game that just happens to have a bunch of other people running around.

It feels asinine, at least in the early hours. Aside from dumb voice chat gaffes, Fallout 76 very much has that “Mid-2000s MMO” feeling where everyone is ostensibly the chosen one, and you all just happen to be doing the same quests at the same time. Thus you and 20-odd other survivors emerge from Vault 76, then you all wander towards a little junkyard, then onto the town of Flatwoods, and so on.

I imagine this feeling goes away the longer you play, as people spread across the map and decide to focus on side quests or exploration or base-building, whatever the case. It’s a terrible first impression though, a bunch of jumpsuit-wearing idiots bunny-hopping through town and lining up to use quest-essential terminals and firing their guns in the air.

Yes, lining up to use terminals. You heard me right. As if the faux-MMO rowdiness weren’t enough, Fallout 76 also implements one of my least favorite features by forcing you to wait for other people to progress through missions before you can continue. Someone’s using the cooking station the mission directed you towards? Stand and wait until they’re done. Someone’s using the terminal? Better hope they’re a fast reader.

And for a series that traditionally relied so heavily on atmosphere, Fallout 76 is quick to undercut its own strengths. There’s nothing more disappointing than being deep in a crumbling ruin and then hearing someone else’s footsteps. Destiny 2 solves this problem by heavily instancing certain areas, like the Lost Sectors. I wish Fallout 76 did the same—and maybe it does, for key story beats, but nothing I’ve encountered so far.

It’s not so much that I’m against a multiplayer Fallout. I just don’t think Fallout 76 gets there. I remember meeting other players in DayZ or Rust and how threatening that felt. The stakes were high, for everyone involved.

Fallout 76 feels like the theme park version of those ideas. It’s a survival game, sure, but you’ll barely have to think about water or food—it dumps so much on you. And there’s no consequence for anything. When you die you don’t lose any progress, nor any items. You pop back up somewhere else and keep playing.

From the standpoint of limiting griefing, it makes sense. You don’t want some asshole ruining the fun for everyone. On the other hand, it makes multiplayer feel entirely superfluous. Nobody really cares if they die, and so nobody really cares (at least in my time so far) about meeting other people. There’s no tension, no standoff where the two of you eye each other’s weapons and armor. Fast travel is slightly easier if you team up, but I wasn’t too surprised in my session that everyone lone-wolfed it—except, you know, two-dozen lone wolves all in the same area.

I think personally I’d prefer a Warhammer: Vermintide-type game, a four-player co-op version of Fallout 76 where you and some friends can raid the world together. In theory you’d get the same sort of experience, but with more opportunity for storytelling and fewer live microphones.

That’s not what we got though.

Is it all bad? No, of course not. If you can get far enough away from the idiots, there’s a lot of Fallout to explore. Sure, the story is told in bits and bobs of audio recordings and archived emails. Bethesda’s commitment to zero human NPCs really limits its storytelling options, and those limits become clear very early on. But it’s interesting to see Fallout’s world so soon after the bombs dropped, read about the people who survived for a few days, weeks, or even years after and the struggles they faced while you were sitting in the Vault. Some of it still doesn’t feel very Fallout in tone, but it’s at least more interesting than jumping even further into the future and still wondering why some hapless ghoul didn’t drag the debris out of his yard after 300 years.