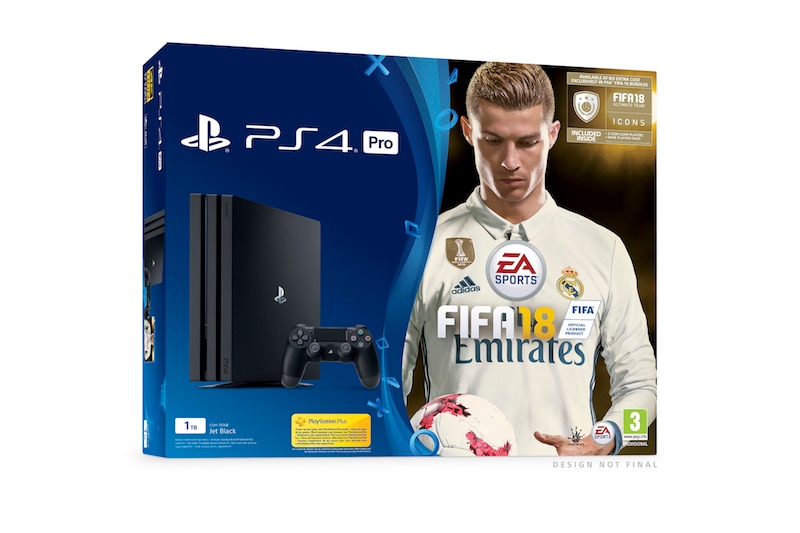 FIFA 18 release date is September 29. In the run up to this, Sony has announced several PS4 and PS4 Pro bundles that include FIFA 18. Previously, Microsoft had marketing rights for the franchise and had bundles for FIFA 16 and FIFA 17 respectively.

No price has been announced just yet and like most PS4 and PS4 Pro bundles, FIFA 18 is on disc. Sony also let slip what to expect in the way of exclusives.

“Also included exclusively only in FIFA 18 PS4 bundles is a FIFA Ultimate Team Rare Players Pack and three Icon loan players, giving you a head start on building your FUT team,” claimed Josh Linger, Product Manager, SIEE on the official PlayStation Europe blog. This includes one rare players pack and three Icon players as a five match loan. They will be randomised.

What’s more is these PS4s will ship with the FIFA 18 Ronaldo Edition which has  numerous FIFA Ultimate Team items including a Cristiano Ronaldo loan item (5 match loan) plus 20 Jumbo Premium Gold FUT packs (1 per week over 20 weeks) and additional FUT kits.

But perhaps the biggest bonus is access to FIFA 18 three full days prior to release.

No price or release date for these bundles have been given for India. However, at the time of filing this story, Sony has not replied to Gadgets 360’s request for comment if these FIFA 18 bundles will be made available for India. We’ll update this story the moment we hear from the company. Though we’re optimistic of it showing up.

With the popularity of the PS4 in India, Sony has been more open to allowing bundles into the country that include games other than its own. Considering India falls under the European region for Sony, there’s a good chance we could see these bundles being made available in the country. It could prove to be insanely popular what with a majority of Indian gamers buying a PS4 (or Xbox One) for FIFA.

Retailers too could breathe easy given that FIFA has been an Amazon India exclusive for the past couple of years. Reason being, Sony India traditionally does not make a bundle exclusive to one single store, preferring mass distribution across outlets