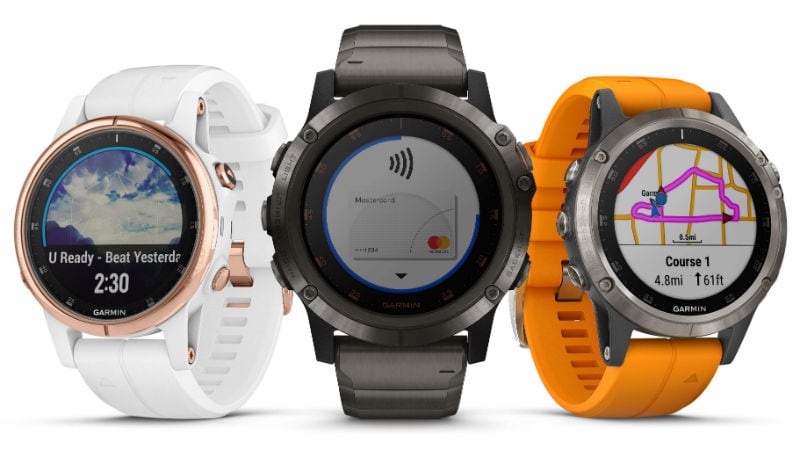 Garmin has announced major updates to its Fenix line of smartwatches. On the heels of unveiling new features to the Vivoactive 3 in the form of the Vivoactive 3 Music, the company is now releasing similar features to the Fenix 5 series. The new Fenix 5S Plus, Fenix 5 Plus, and Fenix 5X Plus smartwatches now come with Garmin Pay and music storage support. They also include GPS and routing features that will come as good news for athletes. Notably, the Fenix 5 Plus lineup is costlier than the original as the prices range from $699.99 (roughly Rs. 47,600) to a whopping $1,149 (roughly Rs. 78,200).

The Fenix 5 Plus series, which includes the Fenix 5 Plus, Fenix 5S Plus and Fenix 5X Plus, now come with Garmin Pay support to make contactless payments and an inbuilt music player enabling users to stream music when paired with Bluetooth headphones. All three smartwatches will be able to store up to 500 songs and download offline playlists from select music streaming services, including iHeartradio and Deezer, as well as transfer music directly from a PC. Fenix products are meant for off-the-grid and in extreme environments, making them ideal watches to have music storage so users can leave their smartphones back at home.

Garmin is also bringing new sensors, with the addition of a Pulse Ox acclimation sensor. It lets users be aware of their blood oxygen saturation levels that will be particularly useful during outdoor tracking when you need to adjust to higher altitudes. Notably, this feature is only available on the 5X Plus model.

The new smartwatches also include Galileo tracking to find your location when GPS might fail. Also, the Fenix 5S Plus sports a larger 1.2-inch screen while still remaining suitable for slimmer wrists. You can choose from heavier, PVD-coated stainless steel models or lightweight titanium models for all three of the Fenix 5 Plus watches, which range from 42mm to 51mm in case size.

Garmin has also brought the cycling and running-friendly Trendline routing feature from its cycling PCs that use Garmin Connect data to enable users to find the best trails and running routes based on miles logged by other Garmin users.