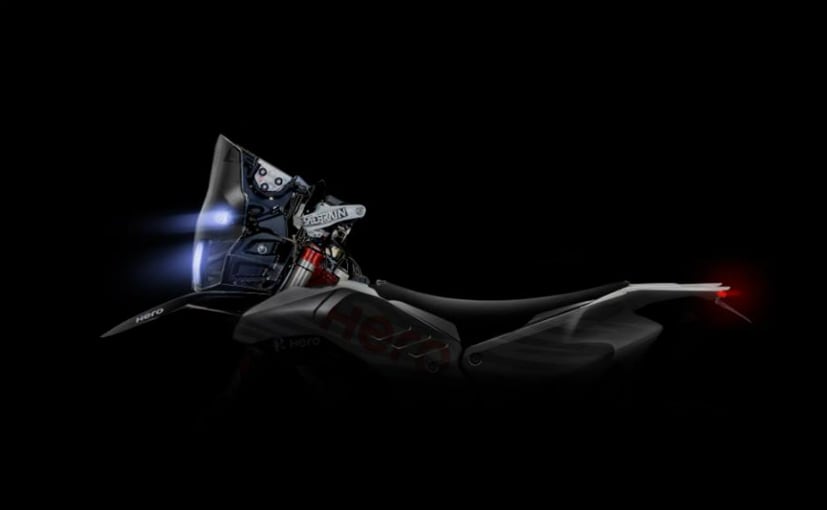 Hero MotoSports, the motorsport arm of Hero MotoCorp, has recently released a teaser for the new rally bike which will be participating in the 2018 Dakar Rally. The teaser shows the outline of the new bike, which has been built by Speedbrain, Hero MotoCorp’s motorsport partner. From what we hear, the new Hero Dakar bike will have 450 cc single-cylinder engine which makes around 54 bhp. The teaser reveals the upper part of the motorcycle and one can make out that the front-end is a bit different, with new headlamps. The seat and the rear end of the bike too sees few changes as well. The Dakar Rally is particularly tough and expect the bike to be ready for all sorts of punishment.

The bike will be fully kitted out for Dakar and some of the equipment includes a navigation tower, road book or tulip chart holder, three water reservoirs and two fuel tanks (main and auxiliary). These are just some of the features that a long distance rally bike has. With over 9,000 kilometres to be covered under the severest of weather and extreme terrain, the Dakar Rally is perhaps the most gruelling rally-raid event in the world.
The new Hero Dakar Rally bikes will be piloted by India’s CS Santosh and Portugal’s Joaquim Rodrigues, who is also popularly known as J-Rod. At the 2017 Dakar, Santosh finished at the 47th position and J-Rod finished 10th. Interestingly, it was J-Rod’s first Dakar outing. With both riders finishing the Dakar Rally, Hero will surely by gung-ho for the 2018 edition. Plus, new bikes always make things interesting. So, we really can’t wait for January 2018.