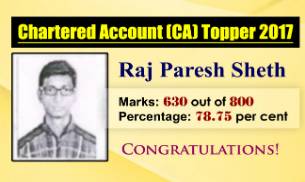 Meet Raj Paresh Sheth from Dombivali (Maharashtra) who has secured All India Rank 1 in ICAI CA examination by studying just 13 hours a day.

In an interview with India Today Education, Raj Paresh Sheth said he somewhat knew that he would score well in the examination but did not expect All India Rank 1.

Coming from a family of literates, Sheth’s father works at a private company while his mother is a house wife.

Further, both her elder sisters have completed Master of Commerce and Master of Business Administration (MBA) from colleges in the state itself.

What did he do in CA Articleship?

How he made it:

While speaking about his study plan, Sheth said, “With three to four months before the examination, I just studied for 13 hours and before that I studied for just two hours.”

“Regular studies and discipline will only help you out achieve your goal in life. My sincere request to all the CA aspirants are that just refers to material provided by the institute.”

“As of now I have not decided which company to join, but I am more interested in finance file and that too actuarial science,” Sheth added.