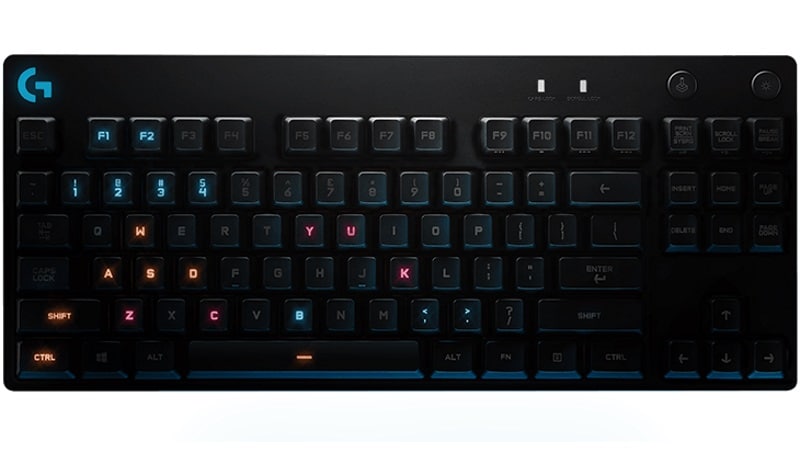 Logitech has unveiled its G Pro Mechanical Gaming Keyboard meant specifically for e-sports gamers and claims to offer faster keystroke processing, which as most of you might know, can prove to be crucial in competitive gaming. The keyboard has been priced by the company at $129 (roughly Rs. 8,600) and will be made available later this month.

The company says that it has worked in collaboration with some of the “top e-sports athletes” and developed the keyboard to ensure it is suitable for professional competitions. Unlike most mechanical keyboards, which use Cherry MX switches, Logitech has chosen to use its own Romer-G mechanical switches on the G Pro Mechanical Gaming Keyboard. It claims the switches are “purpose-built for pro-grade performance, responsiveness and durability offering precision and speed.” Logitech adds that the Romer-G mechanical switches offer 25 percent faster actuation than standard mechanical keyboards with a short-throw actuation point of 1.5mm.

The Logitech G Pro Mechanical Gaming Keyboard also features improved Keystroke Signal Processing (KSP), which the company says reduces response time by up to 10ms – giving users an edge over the competition. The Romer-G switches combined with the intelligent KSP give the switches a rating to withstand over 70 million keystrokes. To avoid ghosting, the company has given the keyboard a 26-key rollover.

The keyboard comes with detachable Micro-USB connector and therefore enables users to carry it around easily. “The Pro Mechanical Gaming Keyboard features a compact tenkeyless design, making it easy to pack for tournament travel and freeing up table space for low-sensitivity mouse movement. The keyboard is reinforced with a steel back plate, adding stability and rigidity for gameplay,” the company said. Unfortunately, with the tenkeyless design, users will have to forego the numpad and the volume dial as well.

The RGB-backlit keyboard is capable of letting users choose from 16.8 million colours, and users can also choose to customise each individual key light with company’s Logitech Gaming Software as well. The Logitech G Pro Mechanical Gaming keyboard offers users onboard memory as well where they can choose to store patterns for later use. The Romer-G switches feature one advantage over regular Cherry MX switches on this front as well – the RGB lighting can be integrated into switches themselves, giving a more even effect.