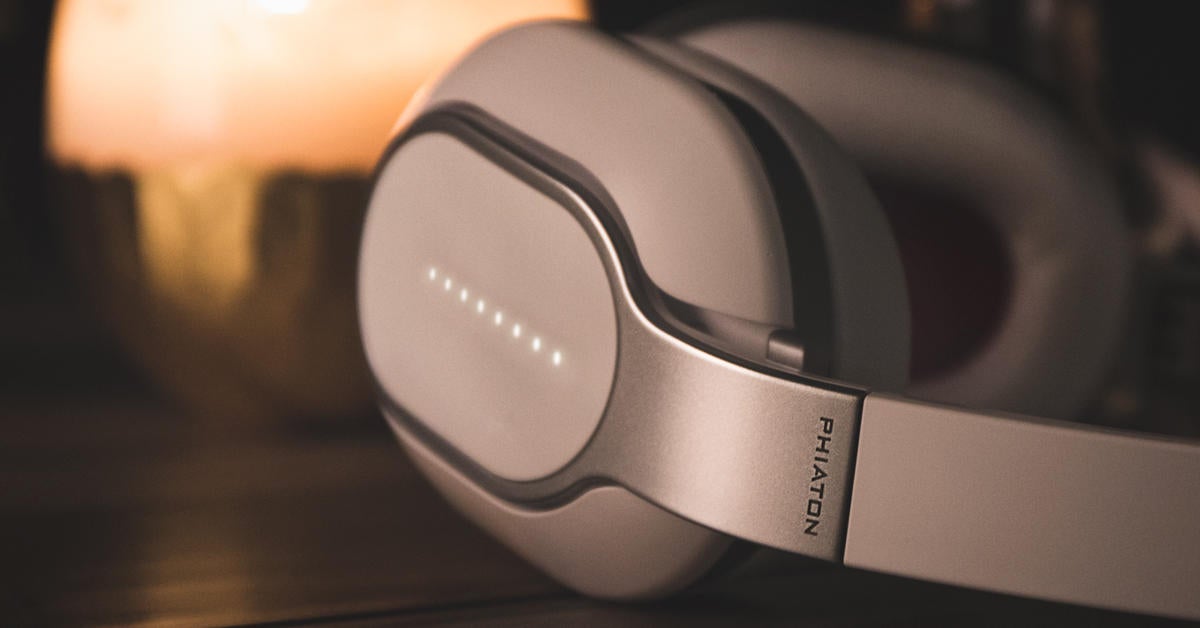 Phiaton (pronounced FEE’ ah ton) derives its name from the Greek letter ϕ or “Phi” which was often used to represent the golden ratio. “Ton” has a double-meaning. It’s a nod to the word “tone,” which in English refers to the character and quality of sound. In French, “ton” to mean fashionable style.

Phiaton attempts to express all of those virtues in the company’s BT 460 Bluetooth wireless headphones. My review pair came in the newly released violet color, affectionately called the “Teddy Edition” on the packaging. Opening up the package, there’s a clear nod to style in these headphones. There seems to be this consistent, almost perfectly symmetrical oval theme to everything in the headphones. The ear cups and the ear pads have the same symmetry. This extends all the way to the shape of the including carrying case, which expresses almost the same exact oval shape and ratio. It’s no wonder Phiaton won the iF Product Design Award, among others, in 2016.

The violet-colored satin-finished accents on the headphones are rich. The angles and rounded edges of the different accented parts of the headphone are seemingly tailor-made to provide a visual interplay between light and shadows. When light hits the satin finish, it highlights the violet color without washing it out. When shadows fall, the accents take on a deeper purple color.

The headphones as a whole are very light (about 240 grams, sans cable) for their size and seem to be made primarily of plastic—including the head band’s click-adjustable mechanism. The underside of the plastic headband has a rubbery section that feels like its filled with air as opposed to a cushion material. The ear pads themselves are very soft and covered in imitation leather. They compress easily, are modestly sized, and shallow. When you wear them, you’ll feel your ears touching the ear pads and the soft part of the inner ear cup. Headband pressure is modest. If you shake your head back and forth, you’ll notice some play with the headphones on your head.

Under the hood, there’s a 40mm driver, but Phiaton doesn’t specify what it’s made of. The company does say, however, that the headphones feature oversized neodymium magnets to control the bass response. The BT 460’s frequency range is rated at 10Hz to 27kHz, both well beyond the limits of human hearing. Impedance is 32 Ohms with a sensitivity of 99dB at 1kHz, which typically means that you won’t have any problems driving the headphones with a mobile device.

Bluetooth 4.0 is onboard. You can pair the Phiaton 460 with two Bluetooth sources and toggle between the two. The feature is near instantaneous, too. For example, I was playing Led Zeppelin via my iPhone through the BT 460, and then started playing Pink Floyd on an Astell&Kern AK70. Once I paused Zeppelin on the iPhone, Pink Floyd almost instantaneously kicked on. The same worked in the reverse, though it took the iPhone a few extra seconds to kick in.

You’ll get about 20 hours of music and call time and a whopping 110 hours of standby time with the Phiaton BT 460. A full recharge only takes about three hours via micro USB. The port is hidden on the underside of the right ear cup behind a plastic cover that easily pops off. Next to the micro-USB port you’ll also find a 3.5mm connection should you ever want to use the headphones in wired mode or if the battery runs dry. The inside of the cover also has clear plastic male molds for the female counterparts. This can make the cover a bit more difficult to close, but it stays on tightly. While the headphones aren’t IP-rated for water resistance, this added measure of protection should do a nice job of ensuring no stray water gets into these sensitive components. I liked this attention to detail.