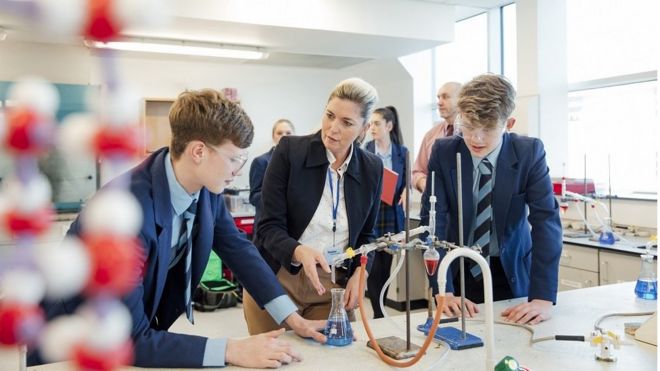 Scotland has been given a mixed report in an important piece of international research on education.

The Pisa report measures the performance of 600,000 15-year-olds worldwide.

Since the last report, Scotland’s performance in reading has improved but it declined in maths and science.

Education Secretary John Swinney welcomed the improvement in reading but said there were still challenges in science and maths.

The Pisa report is not definitive and the system has many critics within education.

But it offers one way of comparing the education systems in different countries and can influence policymakers.

Scotland’s performance in the Pisa data published in 2016 caused a political row, with Scotland was classed as “similar to the OECD average” in all three subject areas for the first time.

At the time, Mr Swinney said the results made for uncomfortable reading and showed that radical reform was needed.

How did Scotland rate this time?

Scotland’s score in reading rose from 493 in the last data to 504 this time.

Compared to the other home nations, it was ahead of Wales and Northern Ireland but slightly behind England.

Performance in maths slipped by two points (491 down to 489) against 2016 – the figure was behind both England and Northern Ireland.

In science, performance slipped seven points (497 to 490) – the total was notably behind England and slightly behind Northern Ireland.

About 600,000 students in 79 countries took part in the Pisa research, conducted last year.

The Pisa testing system was set up in 2000 among countries from the Organisation for Economic Co-operation and Development (OECD).

The initials stand for Programme for International Student Assessment and is designed to examine how 15-year-olds can apply what they have learned in school to real life situations.

Pupils are asked to use their skills of reasoning, interpretation and problem solving rather than simply remembering facts.

The questions are designed to be “culturally neutral” so youngsters in particular countries are not at an unfair advantage or disadvantage.

Scotland’s performance in all three subject areas ranks well behind where it stood in 2000.

The latest Pisa figures do not make for a repeat of the grim reading of last time but it is hard to find them cheerful. The best which might be said is that there are signs of recovery and stability.

Reading performance has improved – but still lags below the level it was at in surveys before 2016.

The headline scores in maths and science continued to decline, albeit by small amounts. Government statisticians see this as a broadly stable performance because of the so-called “confidence intervals” in the data.

Education experts would caution against using Pisa in isolation as a verdict on Scottish education.

It is a way of attempting to measure the performances of young people in a range of countries which have very different education systems.

The Scottish government would point to other ways of measuring attainment, saying that together they help paint a more complete picture – for example, exam results and data on how many school-leavers are in so-called “positive outcomes”.

But for a government which wants to be judged on education – and which wants its system to be world-class – it’s never good news for a major piece of research to suggest that Scotland is still only average in two of the three categories.

What’s the picture within the UK?

Within the UK’s four devolved education systems, England was the highest achiever in all three subjects.

In reading tests, Wales scored below the average for OECD countries, while England, Scotland and Northern Ireland were all above average.

What is the reaction to the results?

Scotland’s education secretary said: “Pisa doesn’t cover everything but today corroborates what we see elsewhere – improving schools and a closing of the attainment gap.

“That is down to great teaching, well-supported pupils and the investment we have made. Much still to do, but well done everyone on a good result.”

Scottish Conservative education spokeswoman Liz Smith said the maths and science results were a “humiliation” for the SNP government.

She said: “These two areas are so critical to the success of much of Scotland’s modern economy. We should be doing so much better.”

Scottish Labour’s education spokesman Iain Gray said the “small improvement” in reading was welcome but further falls in maths and science were “alarming”.

He said: “John Swinney and Nicola Sturgeon have been warned again and again that we have a problem with STEM subjects being squeezed out of the curriculum but they refuse to listen.”

“Scotland used to have one of the best education systems in the world but under the SNP it’s now just average,” he said.