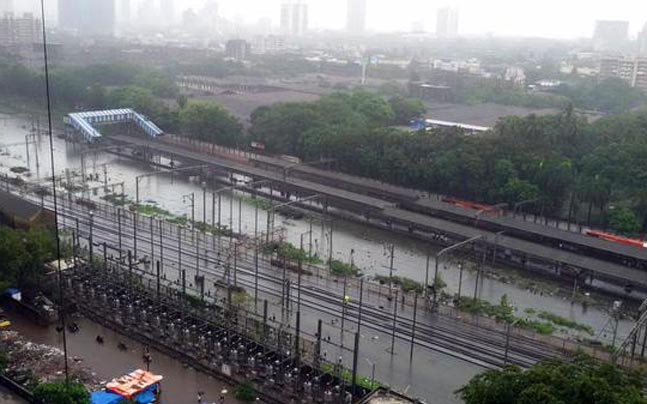 Just a night of downpour has crippled Mumbai’s busy life. Large areas of the megacity witnessed flood like situation on Friday severely affecting rail and bus services. With the weather department’s forecast of high tide and more rains, situation looks to turn worse from bad in India’s financial capital.

Here are the latest developments:

3. Maharashtra Chief Minister Devendra Fadnavis visited Brihanmumbai Municipal Corporation (BMC) control room for to monitor relief works. Civic agencies have warned Mumbaikars to stay inside unless very necessary. “Advisories are being given out after every hour or two, we will handle the situation,” Fadnavis said.

4. People have been warned about a high tide in the afternoon. A tide of 4.60 metres (nearly 15 feet) is expected to hit Mumbai’s coast and people have been asked to avoid sea-facing roads.

5. Movement of local trains, considered to be Mumbai’s lifeline, has been hit badly as tracks are submerged in several areas of the city. According to an estimate, around 70-80 lakh people use local train services daily. Operations on the Harbour line have been suspended and train services have also been stopped between the busy Chhatrapati Shivaji Terminus (CST) and the Kurla suburb on the Central line. The Western Railways is running staggered services till Andheri.

6. Massive traffic jams reported from across the city, especially in areas that are badly waterlogged including Dadar, Parel, Sion, Andheri, Jogeshwari and Santa Cruz. Thousands of commuters stranded as BEST bus services has been hit. Autos and taxis unable to ply on flooded roads.

7. Flights operations at the Mumbai airport are likely hit later in the day. As of now, there are no weather-related delays in arrivals and departures. But if the runway visibility falls, then operations would be suspended.

9. Thane also experiencing flood like situation. The city corporation has asked all schools in the city to remain close for the day.