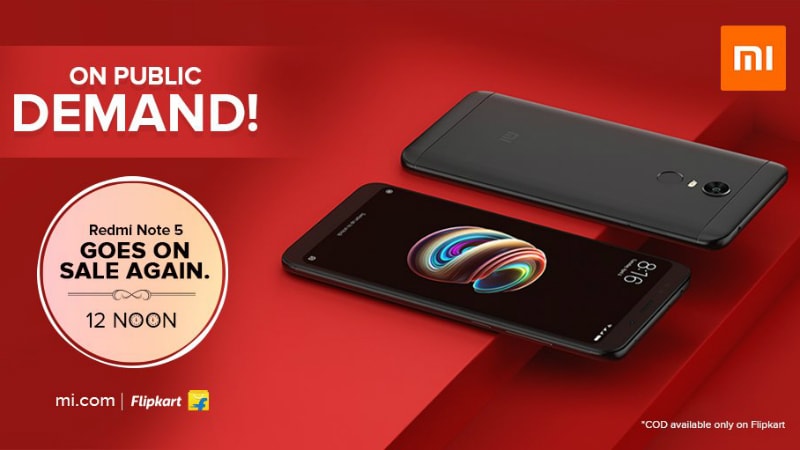 Redmi Note 5 will become available for purchase in India second time this week as Xiaomi announced a surprise flash sale on Twitter. In its tweet early on Friday, Xiaomi said the new Redmi 5 is being made available “on public demand” via Flipkart and Mi.com websites at 12pm IST. The tweets also mentions that the cash on delivery option will only be available on Flipkart, and not Xiaomi’s own website. Notably, the tweet does not mention the Redmi Note 5 Pro smartphone, while Flipkart listing mentionsboth Redmi Note 5 and Redmi Note 5 Pro will be up for grabs; the Xiaomi website says the next Redmi Note 5 Pro sale will be on Wednesday next week. Calls made to company representatives on this matter went unanswered, and we will update the copy when we hear back. The 55-inch Mi TV 4 and 32-inch and 43-inch Mi TV 4A models will also be on sale at 12pm IST on Friday via Flipkart and Mi.com.

The Xiaomi Redmi Note 5 is priced at Rs. 9,999 for the 3GB RAM, 32GB storage variant and goes up to Rs. 11,999 for the 4GB RAM and 64GB storage variant. The phone comes in multiple colour options, including Black, Gold, Lake Blue, and Rose Gold. As announced at the time of launch, Xiaomi has partnered with Reliance Jio to give buyers cashback vouchers worth Rs. 2,200 and up to 4.5TB of 4G data on the Jio network. The Redmi Note 5 also comes bundled with an ultra-slim case.

Coming to the specifications, the dual-SIM Redmi Note 5 (Review) runs MIUI 9 based on Android Nougat, and sports a 5.99-inch full-HD (1080×2160 pixels) display with an 18:9 aspect ratio, and 2.5D curved glass. Under the hood, it has an octa-core Snapdragon 625 SoC, which is clocked at up to 2GHz, paired with Adreno 506 GPU and either 3GB or 4GB of RAM. The smartphone also has a rear-facing fingerprint sensor.

Xiaomi has provided a 12-megapixel rear camera sensor on the Redmi Note 5 that comes with an f/2.2 aperture and is in 1.25-micron pixel size. The rear camera sensor is powered by PDAF (Phase Detection Autofocus) technology and supports EIS (Electronics Image Stabilisation) alongside sporting an LED flash. On the front, the handset has a 5-megapixel camera sensor with an LED selfie flash module.