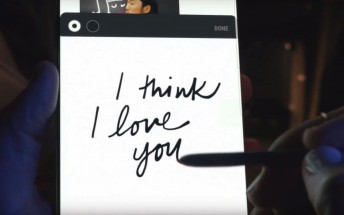 Samsung’s Galaxy Note8 has just gone live in 42 countries on Friday and Samsung has released its first full-length television ad for it. What better way to appeal to an audience by invoking emotion?

In the newest Galaxy Note8 ad, love is the theme and two actors portray a brand-new couple who are figuring out their feelings for each other. The couple communicates with each other using the new Live Messages feature, which offers a more personal touch to messages.

By the end of the ad, the viewer becomes emotionally involved with the couple, in which the girl sends a message to the guy confessing her feelings for him with an accurate display of emotions before hitting send. In turn, the guy makes a light-hearted joke before confessing his own feelings.

It’s a cute ad, one that is targeted to appeal to anyone who has felt crazy about another person in the early stages of a relationship.

With this new ad, Samsung is marketing the Galaxy Note to the masses rather than keeping it a niche productivity workhorse. Yeah you can still clip webpages and keep a messy collection of hand-written notes, but the Note isn’t just for professionals. It’s for anyone who wants to use it, and the ad chose a great way to showcase Live Messages.

[“Source-timesofindia”]
ad Do?) Galaxy has latest Note8 nothing productivity Samsung's to with 2017-09-16
Loknath Das