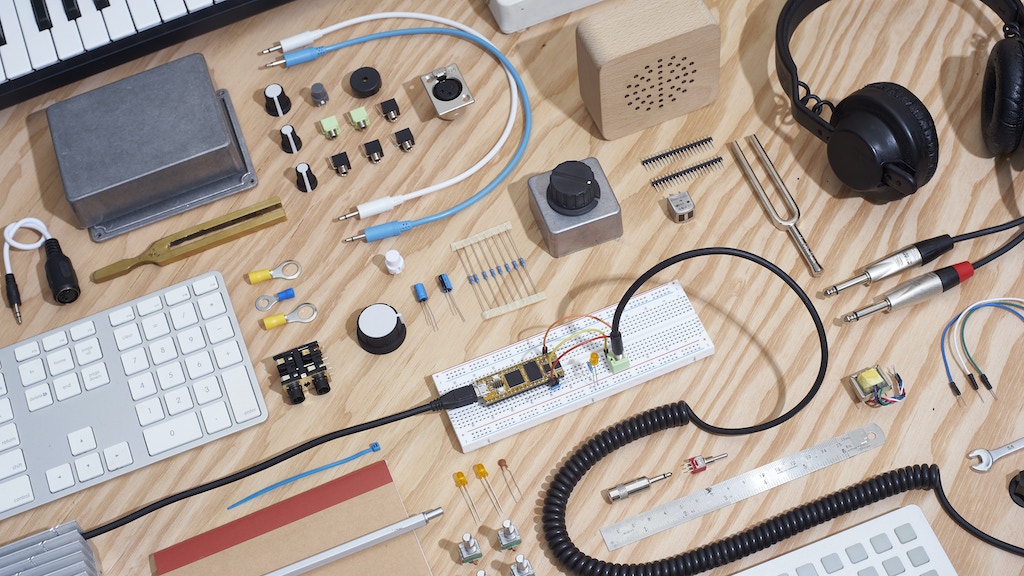 Audio electronics company Electrosmith has launched a Kickstarter for a little audio development board called Daisy. It’s a physical board computer designed for use in DIY instruments and sound processors — think of Daisy like a Raspberry Pi but just for music gear.

Shaped like (and about the size of) a stick of gum, Daisy is both for professionals and for beginners who like tinkering with electronics and code. If you’re okay with fiddling around a bit, you can use Daisy even if you’re not a programmer. It comes loaded with everything to make all sorts of audio hardware devices, like synths, effects pedals, or MIDI controllers. Plus, no soldering is needed — just plug in a USB cable to start loading programs.

You can just buy the board as a blank slate to build something from scratch, or get a ready-made Daisy device if you want to go straight to programming. Electrosmith has made four devices that Daisy can be used with. There’s a breakout board (a more robust version of Daisy for prototyping), a guitar pedal, a Eurorack module, and a desktop synthesizer.

Daisy has a lot packed into a tiny footprint. It’s got two channels of audio I/O that support 24-bit stereo audio with 32-bit DSP processing, support for MIDI I/O through a Micro USB port, USB pins and UART pins, 64MB of SDRAM, and more than 8MB of flash memory. There’s much more baked in, but essentially Daisy is a flexible starting point with lots of ways to expand (like adding extra audio channels or another USB port).

A note on crowdfunding:

Crowdfunding is a chaotic field by nature: companies looking for funding tend to make big promises. According to a study run by Kickstarter in 2015, roughly 1 in 10 “successful” products that reach their funding goals fail to actually deliver rewards. Of the ones that do deliver, delays, missed deadlines, or overpromised ideas mean that there’s often disappointment in store for those products that do get done.

The best defense is to use your best judgment. Ask yourself: does the product look legitimate? Is the company making outlandish claims? Is there a working prototype? Does the company mention existing plans to manufacture and ship finished products? Has it completed a Kickstarter before?

And remember: you’re not necessarily buying a product when you back it on a crowdfunding site.

Daisy is sort of like Teensy, another low-cost USB development board. But the company behind Daisy says that there are a few key differences. For one, Daisy has an audio codec on board, so it can generate and process sound right out of the gate. It also has pin headers (electrical connectors) pre-installed, so no soldering is needed — Daisy can be popped directly onto standard breadboards or perfboards.

There’s a sense of altruism around the Daisy project. It’s not just for people developing products — Electrosmith says its goal is to use music to encourage STEM education and “create a community of learning centered around hacking the Daisy to make fun and awesome audio projects.” In the future, the company says it will post tutorial videos and example programs with documents that describe how different circuits work. And Daisy’s firmware and schematics will be released under a permissive open-source license, so anyone can modify it and use it in personal or commercial projects.

If you want to get a Daisy and tap into your DIY side, it can be preordered on Kickstarter for $29, with expected delivery in April.