Unity is making it much easier to make films from games 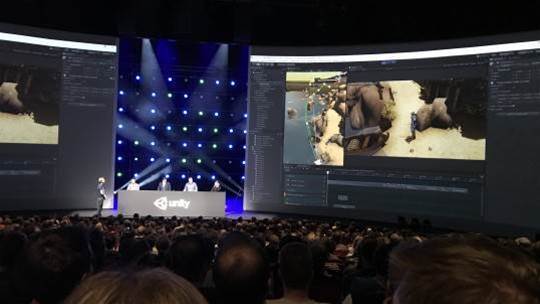 At Unity Unite 2017, a PC game is pulled apart and made into a film set.

On stage at the Amsterdam Theatre, Unity showed how the latest build of its game-making engine can be used to slice and dice retail games into free-to-play mobile titles – and how to transform game worlds into virtual film sets.

The big addition to help all of this in Unity 2017.1 is Timeline, an in-engine editor that aims to make it easier for devs to sort animations and camera angles in their work. Whereas game makers often have to use exterior software to edit animations, Timeline lets users drag, drop and blend cinematics much like they’re putting together a movie. It’s supposed to be intuitive, and the demo did a good job of making it look like a slick tool that could prove useful for film directors as well as game developers.

A gaggle of developers first demonstrated the steps needed to bring video ads and in-app purchases into a PC game, as well as how to cut it into bite sized chunks for mobile players. The lab rat in this case was Shadow Tactics, an isometric stealth game.

Taking the pre-existing assets for Shadow Tactics, the devs were able to stitch together a handful of animations for a playable character, making the ninja leap, jump and land across as chasm without once exiting Unity. The PC game’s environment were cut into smaller section, with character movement limited to specific locations – a lot like Eidos’ GO series of games. In-app purchases and video ads were also integrated using the engine, effectively completing the metamorphosis (Shadow Tactics awoke one morning to find itself transformed into a monstrous freemium game).

More impressive was a demonstration of how to use Timeline in coordination with Unity’s new camera-tracking tools. In front of the audience Unity’s developers set up a waypoint system, telling the engine’s camera to automatically track the player as they moved across the screen. To direct the camera’s movements, dolly rails were drawn within the game environment. “Just like in a film set,” noted Adam Myhill, Unity’s head of cinematics, “except you have an infinite budget”.

Later, a cinematic section was edited using Timeline, with some cuts directed, but others left to the engine to decide. “I’m not animating the camera, I’m just giving them intent,” said Myhill, Left to its own devices, Unity was able to make sure moving characters weren’t blocked by rogue walls when stalking through the game’s world.

It’s an interesting exercise in taking a pre-made game and mushing it into a different shape. In this case, Unity is highlighting how developers can rejig retail titles into free-to-play money makers, but more generally it shows the potential for Unity’s new build to easily change forms for different audiences. That could be a shift from PC to mobile, but it could also encompass bigger changes: from a stealthy action game into a walking simulator, for example, or an action game into an animated short.

There’s nothing to stop film directors collaborating with game developers, for example, using their virtual worlds as a basis for making Unity-powered movies. Partnerships like these would have been possible before, but Unity’s new tools look to make this much easier to pull off. We’ve not yet