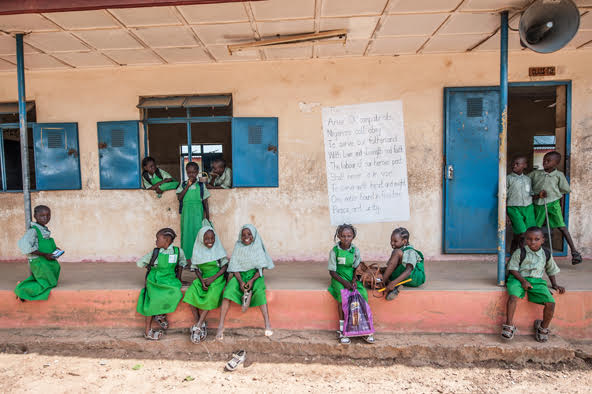 Students at the Kuje School near Abuja, Nigeria sit outside the classroom. (Photo courtesy of A World at School/Nick Cavanagh)

The global education crisis can seem overwhelming. Today, there are 263 million children and young people throughout the world who are not in school, and 60 million of them live in dangerous emergencies. Fast forward to 2030, and our world could be one where more than half of all children—800 million out of 1.6 billion—will lack basic secondary-level skills. Almost all of them will live in low- and middle-income countries.

What’s more, many of those children will never have the chance for an education at all; others who do attend school will drop out after only a few years. Their job prospects will be poor—their likelihood of becoming the entrepreneurs who will drive the next stage of global growth even more uncertain.

This is a prediction of course—not a done deal by any means—and yet many low- and middle-income country leaders fear that this grim possibility will become their reality. They understand that lack of quality education will leave their countries unable to gain economic ground or improve the well-being of their citizens. And they realize that large numbers of young people—who should be a huge asset to their countries—can easily shift to the liability column and become sources of instability if they are deprived of their fundamental right to an education.

We must not allow these projections for tomorrow to overwhelm us today. We must not let them keep us from striving to expand high-quality learning opportunities for all young people—because in fact, real opportunities to achieve those goals exist. If countries have the political will to reform and invest, and are met with international support, we can buck this troubling trend. Some countries are already on the right path. And if all countries accelerate progress to keep pace with the world’s top 25 percent of education improvers, many children in low- and middle-income countries could unlock educational opportunities within a generation.

Consider Pakistan. The country has seen many improvements over the last two decades. According to the World Bank, Pakistan’s gross national income per capita in 2015 was $1440, up from only $490 in 2000. Other development indicators, such as life expectancy and infant mortality, have also improved as Pakistan’s income levels have increased.

But progress is an uneven force, often giving with one hand and taking with the other. With a population of more than 188 million people, Pakistan has more out-of-school children and adolescents—some 22.6 million Pakistani youth are deprived of an education—than every country except Nigeria. Of those in school, fewer than one-third are on track to achieve primary level skills. This is 20 percent below the average for lower-middle-income countries. So while incomes in Pakistan have grown, the country’s education investments are too limited and existing resources too often do not produce the needed results.

Pakistan is determined to double its own investments in education from just over 2 percent to at least 4 percent of GDP and is experimenting with results-based approaches and other reforms to improve outcomes. But even as it achieves greater investment and efficiency, Pakistan, like many other lower-middle-income countries, will require additional external help estimated at about $1 billion annually over the next 15 years.

Accessing this level of external financing at the appropriate interest levels will become increasingly difficult. Today, Pakistan is still eligible for low-interest loans from the World Bank and regional development banks to help finance education. But as the country continues to move up the middle-income ladder, it will no longer be eligible for this favorable financing. As the pool of grants and near-zero percent interest financing shrink, the only option to increase external financing becomes borrowing money at relatively high interest rates—3 to 4 percent from multilateral development banks or even higher rates from commercial markets. Evidence in other countries has shown this scenario creates a disincentive to invest in education.

In transitioning to lower-middle-income status, countries can find themselves in a position similar to that of many middle-class American families struggling to finance their children’s college: They’re too poor to pay for education and too rich to qualify for financial aid. Countries such as Ghana, Vietnam, and Guatemala may soon be in a similar situation.

What can these countries do to make education for all children a reality? One of the keys to expanding access to a quality education is financial innovation. A group of leaders from the private sector, government, and civil society, collectively known as the Education Commission, offers a solution: the International Finance Facility for Education, a specialized mechanism that would make donor dollars work harder—and go farther—for global education.

History proves that big financing ideas can triumph over seemingly insurmountable global challenges. In the late 1990s, the World Bank and the International Monetary Fund started the HIPC initiative to help the poorest countries—those weighed down by debts they couldn’t even hope to pay. These countries were offered $100 billion in debt relief. As a result, instead of allocating valuable and limited funds toward interest payments, they could invest in their infrastructure and health systems. Another example is the global vaccine initiative Gavi. Established in 2000, Gavi used an international finance facility to mobilize $5 billion of private sector funding to help save the lives of millions of children.

We’re proposing a similar model. In operation, the facility would first be supported by guarantees from donor countries. These guarantees would allow the World Bank and regional development banks, such as the Asian and African Development Banks, to borrow more money from capital markets to then lend to lower-middle-income countries. Taking that step would effectively create a new stream of education credits for those countries. Then, to ensure that the money is an attractive option for investing in education, the facility would help lower-middle-income countries mobilize additional funds from donors to subsidize—or completely pay down—interest rates on these credits. Countries would thus be extended a credit line on favorable terms, to be paid back over several decades while they reap the economic benefits of a more skilled population.

A compact between developing countries and the international community would provide the facility’s financing; the hope is that it would incentivize countries to invest and reform in return for international assistance. To ensure the better use of available financing for even greater impact, both parties in each compact would be held accountable; a framework already exists through which results and progress could be regularly measured.

We’re confident that the facility’s benefits would be manifold. If successful, it would multiply donor dollars, increase impact, and generate enough funding—an additional $10 billion annually starting in 2020—to make quality education possible for children worldwide, particularly in lower-middle-income countries. It would nearly double the current amount of external financing for education. The Education Commission, which is led by UN Special Envoy for Global Education Gordon Brown, has met with leaders across Africa, Latin America and Asia, and global donors. Development experts and finance ministers, among others, have warmly received the facility, and we will now take the proposal to the G-20 meetings in Hamburg, Germany this summer. 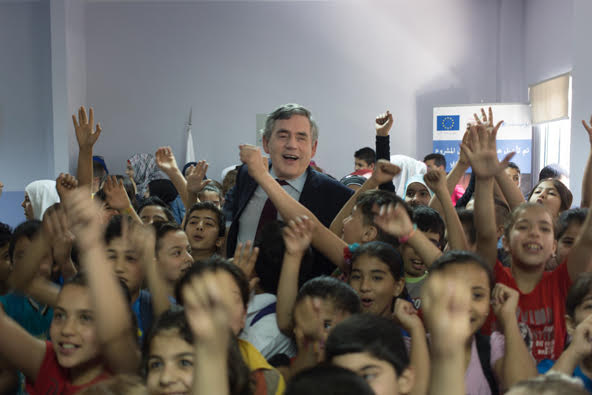 We’re energized by the facility’s potential. And yet, its ability to unlock new funding for education is no panacea. For this global education crisis to retreat, low- and middle-income countries need to do their part by increasing their own financing for education. According to the Commission’s 2016 report, low- and middle-income countries will need to boost education spending from an average of 4 to 5.8 percent. They also need to implement reforms; they must prioritize performance and results, and commit to reaching the most marginalized and disadvantaged populations. In addition, these countries need to embrace innovation in education delivery; improve teacher training, pay and support; and work with the private sector to mitigate the gap between skills required by the modern workforce and what children learn in school.

The proposed facility is capable of bringing the international community closer to education for all. So we’re now asking all stakeholders to close ranks and commit to this breakthrough. We cannot afford to miss this opportunity.