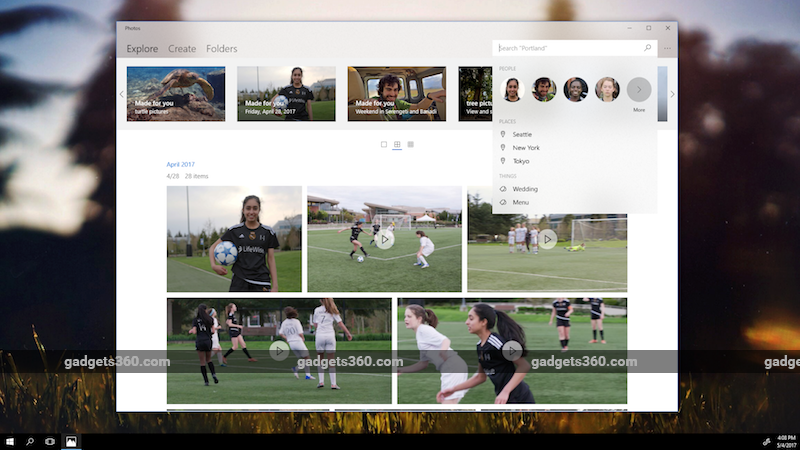 Microsoft started the keynote on Day 2 by demoing Windows Story Remix, its new video editing app that will ship with the Fall Creators Update, which, based on what we saw, can be thought of as iMovie meets Apple Clips on steroids. The app aims to bring professional grade editing capabilities to the regular users.

In the demo, Microsoft showcased how Windows Story Remix makes it easy to mix photos, video clips, music, text, and even 3D objects to really personalise your videos. It can recognise people and objects in photos and videos, which means you can ‘anchor’ text or other objects to them, and watch it follow the person or that object irrespective of camera movement.

Windows Story Remix is a collaborative tool, so you can invite people to share clips from their own phones or other devices, which makes your life so much simpler if you’ve been tasked with creating a video for a collaborative event like a school play, or a cricket match. It can of course create montages that you can edit, and, like other video editing tools, it gives you the ability to change the music and clips that make up the resultant video.

But where Windows Story Remix really shines is its ability to detect people within video, and it let you quickly create another ‘version’ of the video from the perspective of one of these people, making them the star of the show. Windows Story Remix will be available as part of the Windows 10 Fall Creators Update later this year.

Microsoft is also introducing a brand new design language called Fluent Design System, which was codenamed Project Neon. Microsoft says that with Fluent design it is “taking a significant step forward in re-envisioning the way” cross-platform apps are developed.
“Fluent Design enables the creation of more expressive and engaging experiences that work continuously across devices-from large screens, to small screens, to no screen-all in a way that will drive higher engagement and love for your apps,” Kevin Gallo, Corporate Vice President of Windows Developer, Microsoft wrote in a blog post. There are 5 fundamentals to Fluid design system – light, depth, motion, materials, and scale. Check out the video below to get a sense of the key Fluent Design elements.

Don’t expect all your apps to suddenly start looking different with the Windows 10 Creators Update – Microsoft says Fluent Design will show up in built-in Windows apps “over time”, and third-party apps may take even longer to incorporate the new design language.

Windows 10 Fall Creators Update will also pack a host of other features that we’ve covered in detail elsewhere. Chief among these are a new Timeline view that will give a history of all your activity; Pick up Where I Left Off to resume tasks across Windows 10 and mobile devices via Cortana; a new Cloud-enabled clipboard that works across Windows 10, Android, and iOS; as well as OneDrive Files On-Demand that will let you work with files stored on the cloud without needing to sync entire folders with your local machine. We encourage you to check out our full Build 2017 coverage to understand these new features that will greatly enhance your Windows experience.

As the name suggests, the Fall Creators Update will ship this Fall to over 500 million devices that run Windows 10. Some of the new features are available via the latest Windows 10 Insider Build.