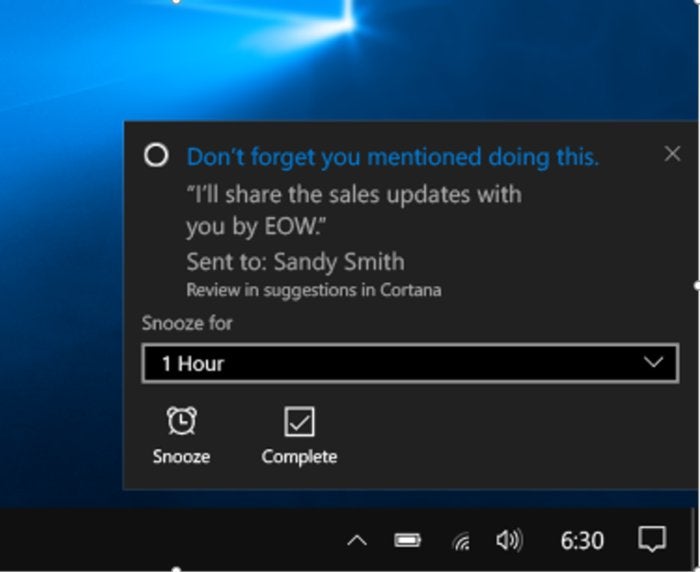 Windows 10’s Cortana is already a dutiful digital assistant, providing answers, reminders, or other information when asked. But Microsoft has given her more power to take the initiative, automatically setting reminders for commitments you’ve already agreed to.

Take an email, for example. You may have promised your boss that you’ll deliver a sales presentation by Friday. Just in case you’ve forgotten, Cortana will automatically issue what Microsoft is calling a “suggested reminder” the day before, to ensure you have plenty of time to finish it up.

“I’ve been on the Cortana team for about a year, doing a lot of demos…but this one feels like something people are really like, okay, this is what a personal assistant really feels like on your PC,” said Laura Jones, the senior marketing manager for Cortana at Microsoft.

Why this matters: Suggested reminders are part of Cortana’s transition from a passive to a more proactive digital assistant. Cortana already knows you’re at the store, for example, and can automatically remind you to buy milk—if you’ve previously asked her to. This is something different. More and more, Cortana is beginning to act on her own, without any input from you at all.

How to use Cortana’s Suggested Reminders

For those who are concerned about protecting their privacy, take heart: Suggested Reminders aren’t turned on by default. You first must be signed in to Cortana, and then connect your Office 365 or Outlook email account. But yes, Suggested Reminders work by reading your email, and then acting upon them. (If Cortana’s already advising you to leave at a given time to ensure you make your next meeting, chances are you’ve already given her permission to read your email and calendar.) Other means of communication will be added over time, Jones said, though she declined to comment when asked if one might be Skype.

Using artificial intelligence, Cortana looks for commitments or promises, Jones explained. Phrases like “let’s have lunch” won’t trigger a reminder. However, “I’ll book us a reservation” will. Cortana tries to adjust the timing of the reminders to the period of the event; if you promise to get something done by the end of day, Cortana will issue a reminder at 3 p.m., she said. If something’s due Friday, you’ll get a reminder at about 11 a.m. the day before.

Check Cortana’s Notebook, periodically, too. If Cortana thinks that it may have a suggested reminder, but isn’t sure, she might store it there, Jones said.

If Suggested Reminders sounds familiar, it’s appeared as part of Cortana within the Windows Insider Program. This a more powerful version, however, with improved machine learning at the heart of it, Jones said.

Jones said she has been personally testing it out for a few months, and has come across a few things she herself has promised and then forgotten about, such as commitments made around the holidays. “It’s saved my butt a few times,” she said.