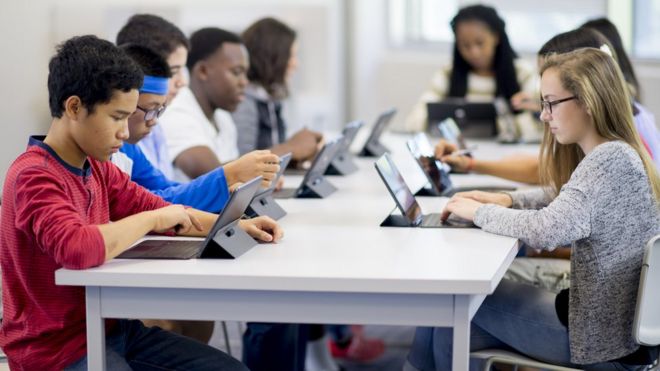 An apology has been made to GCSE pupils after a “technical issue” affected their computer science exam.

Parents complained problems meant the start was delayed while pupils could not answer one of the questions.

It is unclear how many schools were affected, but people in Vale of Glamorgan, Cardiff, Pembrokeshire and Rhondda Cynon Taff highlighted issues.

The WJEC exam board said it is investigating the matter and no pupils would be disadvantaged.

A parent of a pupil at St Cyres school, Penarth, said teachers were unable to log on to the online resource for the exam at the scheduled start time of 13:30 BST on Thursday.

It was then delayed for half an hour.

When it did get under way, she added students could not answer the final question, worth 16 marks, on a programme called Greenfoot.

This was because the exam question was on version 3 while school computers had version 2.5 installed, the parent claimed.

“He had already sat chemistry and ICT exams, so after this was a bit miserable coming home,” she said.

“We don’t know what will happen but will raise it with the school.”

The mother of a pupil at a Rhondda Cynon Taff school reported similar problems, saying her son had to wait in a room for more than an hour for his exam to start.

She added: “For those who want to do software development and gaming development, it’s really important.

“It’s a stressful enough time anyway and they have messed it up.”

Problems were also reported in other areas, including at Ysgol Penrhyn Dewi in St Davids, Ysgol Gyfun Llangefni on Anglesey and Bishop of Llandaff school, Cardiff.

The WJEC did not give a figure of schools affected.

A spokesman said: “We are aware of a technical issue with today’s GCSE computer science paper, and are currently investigating the matter further.

“We would like to apologise to those who experienced difficulties, and would like to reassure those affected that no student will be disadvantaged.”