Yamaha Fazer 250 To Be Launched In India Tomorrow 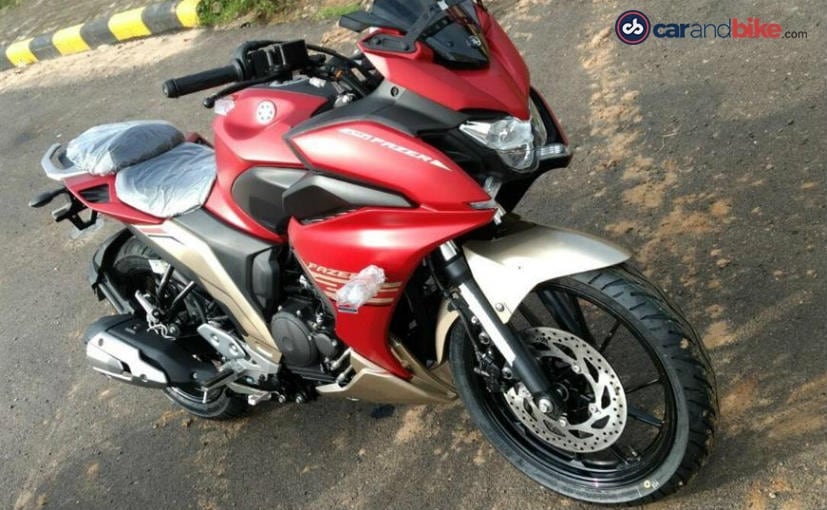 India Yamaha Motor is all set to launch the much awaited Fazer 250 (if it is named so) motorcycle tomorrow. It will be Yamaha’s second launch of the year after the FZ25. The Fazer 250 has been spotted testing in a couple of colours as well. The launch of the Fazer 250 bike comes barely five months after the FZ25 was launched. The Fazer 250 is in fact, a faired version of the FZ25, which is a naked 250 cc motorcycle. The looks of course are slightly different thanks to the fairing up front. A quick look at the bike reveals that the headlamp is the same unit as on the FZ25 and gets two LED strips beneath the same. The good thing is that the fairing seems to be well finished and doesn’t stand out as an oddity or as an after-thought. The overall look of the bike is muscular.
Also Read: Yamaha Fazer 250 Launch Details Revealed

YZF R1
MT-09
yamaha fazer 250 spy shot(The Yamaha Fazer 250 is based on the Yamaha FZ25, and gets a fairing and windscreen)
Also, the two air intakes seem to be aesthetic in nature and do not seem to be functional. The Fazer 250 shares quite a few parts with its sibling, the FZ25. Cycle parts such as the tyres, brakes, wheels and even the fuel tank itself are the same as on the FZ25. The exhaust can too seems to be the same unit as found on the FZ25. The biggest advantage of shared parts is that Yamaha saves a lot in terms of costs, which will be passed on to the customers as well.
Also Read: Yamaha Fazer 250 Pricing Expectation

yamaha fazer 250 spy shot(Yamaha Fazer 250 spy shot)
Also Read: Yamaha Fazer 250 Spotted Testing
We believe that Yamaha will fit the Fazer 250 with the same 249 cc motor which does duty on the FZ25. We expect the power output to remain more or less similar with a peak power output of 20 bhp at 8,000 rpm and 20 Nm at 6,000 rpm. We have ridden the FZ25 to our heart’s content and can confidently say that the engine is super smooth and expect the same on the Fazer 250 as well. As far as pricing is concerned, we expect the Fazer 250 to be tad expensive the FZ25 and weigh a little more, thanks to the fairing. Considering that the Yamaha FZ25 retails for ₹ 1,19,335 (ex-showroom, Delhi) we expect the Fazer 250 to be priced around ₹ 1.3 lakh or so.